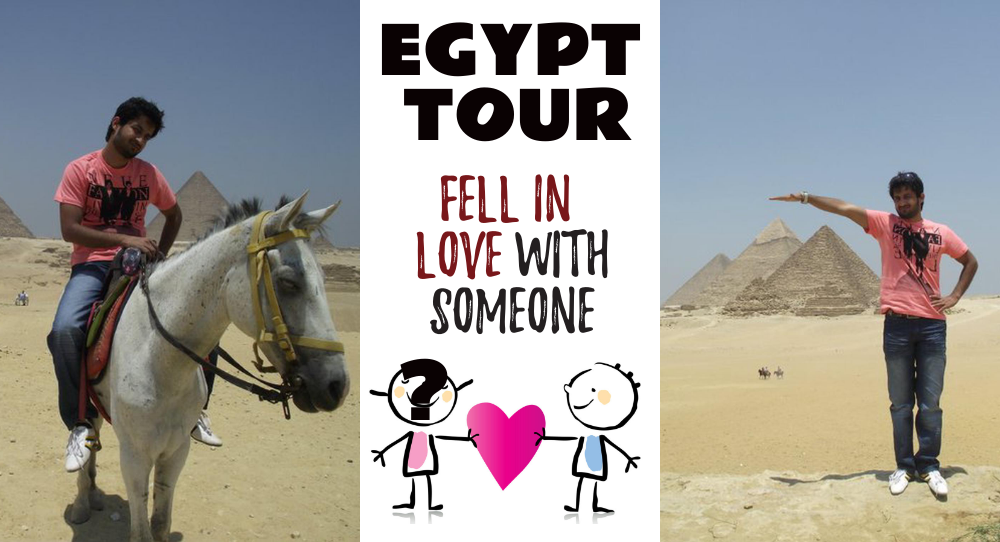 After exploring Dubai, I flew Egypt Airlines to Cairo… still with those stitches on my swollen lip. Why I got stitches on my lips? If you are a loyal reader of my blog, you must know the reason behind it… do comment that in the comment section below!

The history of Egypt was something that attracted me. It’s so rich and long that it fascinated it from the very moment I read about it in my social studies book – Ah, those memorable college days and history classes.

The remaining credit goes to Youtube videos, documentaries, American action horror films like the seasons of The Mummy, for shooting in me the fascination of seeing mummified kings and queens of Egypt, the huge pyramids with backdrops of endless golden-sand desserts, the 4000 years old burial tombs, the archaeological museums, and the oldest known monumental sculptures.

But before I jump on to my Egypt story, I would first like to share how I got Egypt Tourist Visa on my Pakistani passport, since it’s the main thing of interest for most of my Pakistani friends.

Back in 2011, I knew neither earth nor sky about the visa procedure for Egypt. But still, I managed to get my tourist visa… and so can you!

Once you fulfill all the major requirements, the Egypt Visa becomes like picking a low-hanging fruit!

Since I was unfamiliar with the process, I got help from a close friend of mine, who advised me how to get things perfectly done – ditching the local travel agents. Here’s what I did:

I visited TCS Visatronix Express center in Multan and obtained Egypt Visa Application Form and a document containing a list of ‘needed’ requirements for obtaining the visa. There’s a dedicated help counter as well, which guided me in detail about the application process.

What is TCS Visatronix? It is a division of TCS Pvt. Limited, offering Visa DropBox facility for Visa applicants in the non-immigrant categories for Canada, India, Spain, Italy, Greece, Belgium, and South Africa. It has branches in almost all the major cities of Pakistan.

For the requirements, I was asked to submit Passport Sized Photographs with white background, photocopy of my passport, last 03 months bank statement, Polio Vaccination Certificate, Dengue Test Report, Hotel booking confirmation in Egypt, as well as little details about my planned trip, for example, the arrival and departure dates, and the purpose of visiting Egypt.

Since I had all my requirements ready beforehand, I simply filled the Egypt Visa Application Form, attached the required documents, and submitted it to the TCS Vistronix Centre. The center charged me a small visa fee (refundable) as well as the delivery charges for transporting my important documents to and fro the Egypt Embassy in Islamabad.

And that’s it, I successfully filed my Visa Application to Egypt.

My Visa Application Got Approved… I was allocated a time frame of 21 days, but to my surprise, I received my documents back at my Multan address after a week. Ta-da! My passport was stamped with Egypt’s 30 Days Single Entry Tourist Visa (nowadays, you get a visa sticker from the Egypt Embassy).

For a complete step-by-step guide, visit the link below:

Sultan of Multan Lands In Egypt

After completing my Dubai tour – I flew EgyptAir Airline from Dubai straight to Cairo. I was a bit scared because July 2011 was a time when Cairo was just recently opened for tourists in the wake of the 2011 Egyptian Revolution and several terrorist attacks.

Coming out of the airport, I hired a local taxi straight to the reserved hotel. The driver was such a di**head that he scared the crap out of me with his reckless driving. I don’t know whether that lad wanted to end his life or mine. I requested him throughout the journey to drive slow, but he turned a deaf ear as if I was no one!

With continuous prayers in my mouth, I finally reached the hotel. Free at last, thank God Almighty, I’m free at last.

The Spooky Hotel In Cairo Gave Me Mummy Nightmares…

Seeing the condition, I decided not to go inside – thank God, the hotel was booked without prepayment – otherwise, I would have wasted $$$.

After walking several miles into the deserted streets of that area, I went straight to the highway to catch a taxi to some other hotel. The song “Challa Ki Labda Phire… Challa Gali Gali Rulda Phire” perfectly fits that situation.

Imagine a young noob with no prior experience of overseas travel, left stranded like this in a world far away from his hometown.

Finally Found A Hotel & Place Of My Dreams

Someone has said it right “Rain before seven, fine before eleven” as things started to improve after the ugly experiences in Egypt in the initial few hours.

From the highway, I booked a taxi driver. His name was Saeed and was a well-dressed, nice gentleman – knowing the ethics of how to respect a foreign customer and make him feel comfortable. I informed him of my recent experiences and asked him if he could drop me to a suitable living area in Cairo – where there are good hotels, food courts, and at least some festivity.

Being an Egypt national, he felt sorry for everything I came up against. We drove 20 minutes to a posh area of Cairo, where there were luxury hotels, well-established restaurants, and lots of recreation facilities.

Finding Saeed so nice and supportive, I hired him as my private driver for the complete 5-days stay in Egypt.

What I Explored In Cairo, Egypt?

Cairo drew me to drool over the logic-defying feats of engineering that are the Pyramids of Giza, to see colossal sanctuaries and tombs that idea up the privileged insights of the Pharaohs (Egypt’s kings and queens) and the gods they worshipped. Its gloomy skies and streets after the wake of the 2011 revolution was an assault on my senses, but I decided to look beyond the gloominess and found a history that spans centuries.

1). The Great Pyramid of Giza

The Pyramids – the obvious first, right? And in my opinion, they don’t disappoint – they’re actually breathtaking!

The Great Pyramid of Giza (the biggest of the three) is the oldest and the only one of the “Seven Wonders of the Ancient World” which is still standing strong. The site is home to a total of six pyramids; grand burial tombs made for the kings of the 4th dynasty around 4,500 years ago.

Below the cloud-touching 480ft (146m) peak of the Great Giza Pyramid, lies Sphinx – a legendary hybrid of human and lion – guarding the Pyramid.

In the shadow of the pyramids, camel owners were offering 15-minute rides at an expense of around US $30. Even having your photo taken with one can cost around US $10. I paid for two camel rides, the second one for Saeed.

I also paid a small fee of around $20 to go inside one of the six pyramids known as Khufu Pyramid. A genuinely steep (and somewhat terrifying) descent on a wooden walkway took us to the internal chamber. I was hoping to be blinded by the sparkling gold treasures, but according to the guide the room was deprived of its treasures many years back by burglars.

The absolutely stunning collection of antiquities showed in Cairo’s Egyptian Museums makes it one of the world’s incredible museums. You would require a lifetime to see everything on show. Highlights included tombs of Egypt’s kings and queens, mummified bodies of humans and animals, royal mummies collection, ancient jewelry collection, pharaoh’s lion throne, pharaoh’s wardrobe collection, and graves.

I visited one of the oldest surviving mosques in Cairo, built thousands of years back. Highlights include Al Azhar Mosque, The Mosque of Muhammad Ali, Sultan Hassan Mosque, Ibn Tulun Mosque, and Mosque of Al-Hakim.

After the pyramids, the main reason why I visited Egypt is to go back in time (or pretend to be Indiana Jones) while exploring the country’s ancient temples. The temples were loaded up with interesting carvings, artworks, and hieroglyphics.

Cairo features Middle East’s largest bazaars and fortunately, I visited most of them. The bazaars were loaded up with copper, silver, gold, spices, and unique scents. If you have a good eye and are a good negotiator, you can secure great deals on quality items.

Alexandria was a tourist spot for the well off Europeans in the 1930s. The city has a completely different and unique vibe from other Egyptian cities. You’ll feel like you’ve been moved back in time as you walk through the roads lined with exquisite, but run-down, European style structures.

Saeed took me to one of the best restaurants in Cairo alongside some incredibly delicious Cairo food streets. In a few days, I tried some extremely scrumptious Egyptian bites and well known Egyptian foods. Platters of yummy, simple yet delicious dishes loaded up with a dash of culture and simplicity – brought about an overwhelming experience.

Particularly, the fish – Believe me, it had such a heavenly taste, that even after 9 years, I can’t discover a fish that much delicious!

Fell In Love with Someone In Egypt… But with Whom?

Yaar obviously, with Saeed (my driver for 5-days in Egypt)! Nice in manners, sweet at heart, friendly-minded, and a barrel of laughs – I still miss Saeed Bhai to this day.

In those 5-days, we were so attached, that at the time of leaving Egypt, both of us tightly hugged each other and tears automatically started falling apart from our eyes. I controlled my emotions to the full extent, but I remember that Saeed Bhai was literally crying buckets. Two misty-eyed gentlemen finally said a heart-touching goodbye to each other!

Attitude Of Egyptians Towards A Pakistani National

The locals of the town were not that friendly. Saeed told me that it’s all due to the recent Egyptian Revolution and terrorist attacks, which have overshadowed their smiles.